I probably wont be doing any track days in the S2000 for a while but finally had a chance this weekend to cash in my 'Silverstone Single Seater Experience' voucher my wife bought be back last Christmas.

I wasn't expecting too much - the Aston Martin day I did a few years back was fun but was disappointing because the instructors didn't allow you give really open it up. I was expecting something similar on the single seater day but was massively impressed - after the initial few laps behind a pace car your were allowed to really give it some! Weather had been a little wet so the track was quite greasy but really good fun.

The cars were only 1.6 cosworth engines but weighed around 500kg so very nippy with excellent handling - even better than the Elise. I was a little disappointed with the fact that we weren't running on the main Silverstone circuit but aside from that it was an excellent day. Managed 24 laps in the main session, finished 2nd in the 'race' and had the third fastest lap time.

Very tempted to do another one. 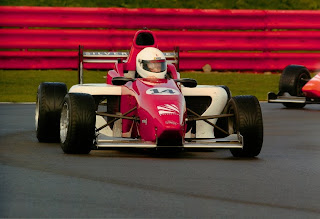 Email ThisBlogThis!Share to TwitterShare to FacebookShare to Pinterest
Labels: Car