Just a quick one but a little while ago a joined the excellent ISP BE. The services comes with their own BEbox modem (a rebranded thompson) which doesnt look to have any SNMP support. Being a true geek I had to monitor the connection stats to make sure everything was running at 100%

A few people have asked how to get the BEbox stats into MRTG so heres a link to my mrtg scripts. They are based on the original parse script here so props to the original authors.

Email ThisBlogThis!Share to TwitterShare to FacebookShare to Pinterest
Labels: Tech

Havent updated the blog in a while - been too busy playing on the arcade :)

The CPO came back from the printers and its fairly decent. Because its printed on vinyl there are one or two small creases which I need to fix but aside from that all the buttons are hooked in and the machine is very usable.

The replacement cold cathode from Amazon is much better and doesnt suffer the same overheating problems. Only remaining bits left are:

Finally finished the CPO design and should get it back from the printers later this week. Rough paper mockup looks fairly decent: 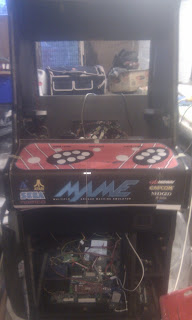 Also had chance to clean and respray the metal control panel, looking much better now. New cold cathodes have also arrived so just testing they dont overheat before fitting to the cab.

Hoping that the cab is back together and mostly done by the end of this week :)
at 09:16 No comments:

Started playing around with the GIMP this week working on a new CPO. First design isnt bad but im gonna make some changes. The good news is (almost) everything lines up. 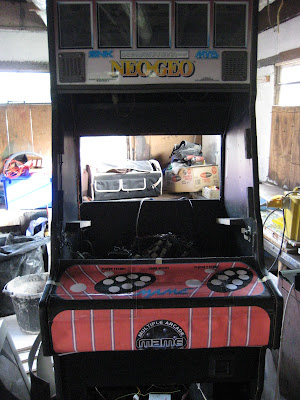 Need to change the middle section now, I forgot about the bend :(

Props to PosteRazor for being able to print the design out to scale - makes life much easier.
at 11:11 No comments:

Been really busy on the arcade cab this week, took the ageing laptop out and replaced it with a vintage dell machine I had hanging about. Much better spec and the games are playing much more smoothly. Mounting it in the cab took a bit of effort but its worth it. I decided not to use the original case but being a Dell the cables were a bit short to say the least. A bit of thinking and many screws later... 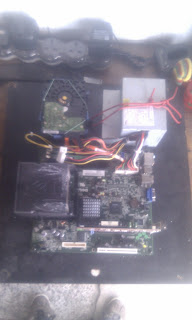 Since the new PC is working I decided today to start the next big job: replacing the control panel and adding the new buttons. Getting it out and stripping the original plastic cover off wasnt too difficult: 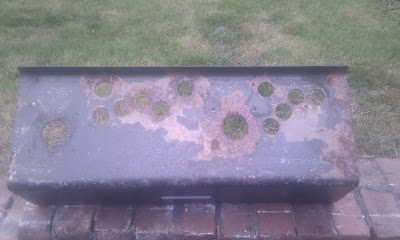 Its a bit rusty so I'll probably have to get it sanded and resprayed (hammerite?) but next I drilled out the new 30mm holes for the additional buttons. I was gonna go with the classic 6 button layout but after drilling the holes it seems I have room for 7 per player. Much drilling, filing and swearing later: 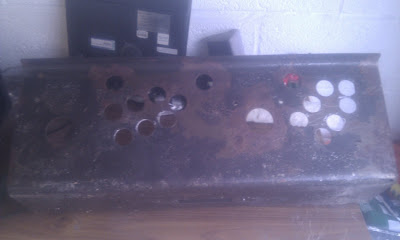 Its a bit of a tight fit in places but all the buttons fit and its time to get some new decals made up. Trouble is that most of the templates you can get online include the actual locations of the buttons. I couldnt find any pre-made templates for a 7 button control panel overlay (CPO) that match where the holes are on mine.I've started fiddling around with a scanned paper template and the GIMP, will post some pics as soon as it starts taking shape.
In other news - I bought a load of stuff from Maplin for the cab. A small amplifier DIY kit - which it turns out is unnecessary, the sound card in the new PC seems to have a bit more oomph. Also bought and fitted 2 cold cathode lights into the marquee which worked fine.. for about an hour, then the inverter died and I have to get it sent back :(
Oh  - one last thing which I'm quite happy with is a new power switch for the PC. Didnt fancy having to open the cab to turn the power on/off so soldered a cable to the existing microswitch and connected a small push button switch hidden in the coin return box. Sad but I like it.
Told you I have been busy ;)
at 13:18 No comments:

Just a quick post about this weeks track day - it didnt go well. Barely half way through the day I stopped on the hangar straight with a very loud car. Its running fine but it sounds like something on the exhaust has blown. Its with Andy so should know more next week.

Up until then I was really enjoying being back on track. Ah well, could have been worse I suppose.
at 13:00 No comments: